Story Code : 533825
Islam Times - Israeli Prime Minister Benjamin Netanyahu has strongly condemned the latest UNESCO resolution regarding the al-Aqsa Mosque compound, which refers to the sacred site solely as a Muslim place.
“This is yet another absurd UN decision. UNESCO ignores the unique historic connection of Judaism to the Temple Mount,” Netanyahu said on Saturday.

The UNESCO resolution refers to Israel as the “occupying power” at every mention, and uses the Arabic term al-Aqsa Mosque without ever calling it the Temple Mount used by Israelis. It also includes the Arabic al-Buraq Plaza when making reference to what Israelis call the Western Wall Plaza.

Additionally, the text accuses Tel Aviv of “planting Jewish fake graves in other spaces of the Muslim cemeteries” and of “the continued conversion of many Islamic and Byzantine remains into the so-called Jewish ritual baths or into Jewish prayer places.”

It also blasts “restriction of access” to the site during Muslim holidays.

It also blasts “restriction of access” to the site during Muslim holidays.

Tensions have heightened in the occupied territories since August 2015, when Israel imposed restrictions on the entry of Palestinian worshipers into the al-Aqsa Mosque compound in East al-Quds.

Al-Aqsa Mosque is the third holiest site in Islam after Masjid al-Haram in Mecca and Masjid al-Nabawi in Medina.

At least 210 Palestinians, including children and women, have lost their lives at the hands of Israeli forces since the beginning of last October.

Elsewhere in the statement, UNESCO censured the Israeli blockade of the Gaza Strip.

The siege “harmfully affects the free and sustained movement of personnel and humanitarian relief items as well as the intolerable number of casualties among Palestinian children, the attacks on schools and other educational and cultural facilities and the denial of access to education, and requests Israel, the occupying Power, to immediately ease this blockade,” the resolution states.

Gaza has been blockaded since 2007, a situation that has caused a decline in the standard of living, unprecedented levels of unemployment, and unrelenting poverty.
Share It :
Related Stories 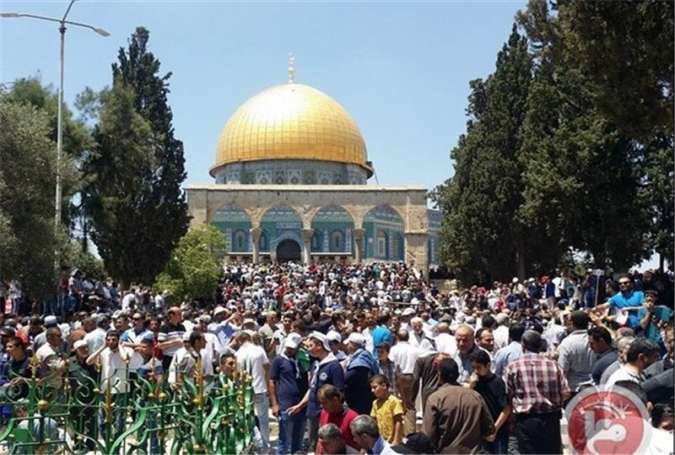