Story Code : 658628
Islam Times - Over 25,000 Palestinian performed Friday Prayers at Al-Aqsa Mosque compound after weeks of deadly protests over humiliating Israeli regime security measures at the third holiest Islamic site.
An employee of the Islamic Endowment, or Waqf -- in charge of running Al-Aqsa Mosque compound, Rami al-Khatib confirmed that at least 25,000 Palestinians had performed prayers at Al-Aqsa on Friday.

Al-Sheikh Muhammad Saleem, who gave the Friday Khutba -- an Islamic sermon -- stressed the necessity of heading to Al-Aqsa in order to confirm its place for Muslims. Palestinians have often feared that Israel will implement policies challenging the status quo at the Jordanian-controlled holy site, which prohibits non-Muslim worship.

Following the prayers, Palestinian youths started shouting “Allah Akbar” (God is Great) while exiting the compound, according to a witness. Israeli regime forces then detained five Palestinians on their way out, including Palestinian photographer Abd al-Fatah Abu Snineh.

Israeli regime authorities shut down Al-Aqsa compound for almost three days following a deadly shooting attack on July 14, only to reopen it after having installed increased and humiliating security measures.

The move sparked widespread anger among Palestinians, who perceived the move as further infringement of Al-Aqsa. After two weeks of protests in which several Palestinians were killed in clashes, the Israeli regime was compelled to completely lift the security measures.

However, Palestinians in the West Bank and Gaza have continued to be barred from visiting the holy site if unable to obtain an Israeli regime permits to enter al-Aqsa.

Some Palestinians have never been able to visit al-Aqsa due to Israeli regime policies shaping its half-century occupation of the Palestinian territory.

In the aftermath of the protests, Israeli forces have cracked down on any Palestinians believed to be involved in the protests, with nearly 50 Palestinians in East al-Quds (Jerusalem) being detained this week due to their activities in the Al-Aqsa unrest.

Over the past decades, the Israeli regime has tried to change the demographic makeup of al-Quds by constructing illegal settlements, destroying historical sites and expelling the local Palestinian population.

The al-Aqsa mosque, which lies in the Israeli-occupied Old City of al-Quds, is a flashpoint and is Islam’s third-holiest site after Mecca and Medina.
Share It :
Related Stories 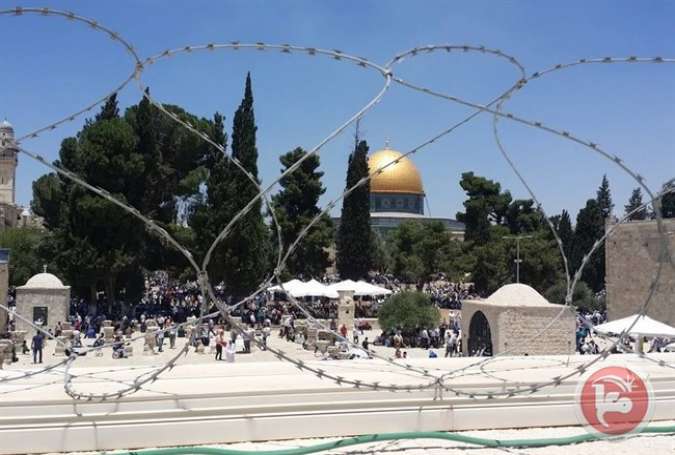